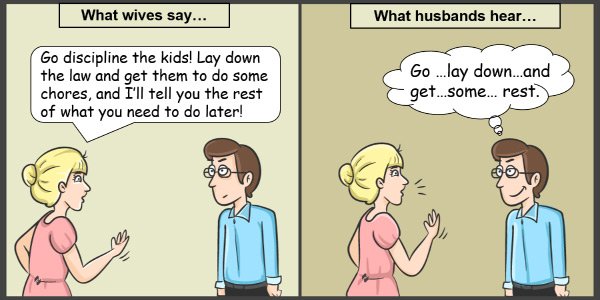 The greatest problem in communication is the illusion that it has been accomplished.
George Bernard Shaw

Have you ever been frustrated when you’ve asked someone to do something, asked them, “Do you understand?”, they’ve said “Yes”, and then they’ve gone and done something completely different from what you expected, leading to delays, rework and extra costs?  Who wouldn’t be frustrated?!!

Who’s at fault? What went wrong? Was it a simple misunderstanding that could have been avoided? Wilful disregard of your instructions? Or something else?

Well, rather than simply playing the blame-game, let’s look at the original communication, because in my years as a business coach I’ve found that ineffective communication is an extremely common cause of misunderstandings and great frustration.

So, in the original communication above, what’s wrong with the question, “Do you understand?”?

Think about this:  What if a mum gave her 10 year old son some chores and said:

“Johnny, here’s your chores: I want you to vacuum and wash the car.  Do you understand?”, and Johnny said “Yes mum”.

Instead of saying, “Johnny, I want you to vacuum and wash the car”, what if she’d said:

“Johnny, I want you to vacuum and wash the baby.”?  Hmmm! An almost identical sentence! …could end up with a very clean and dust-free baby!

So, the question is, how can you confirm that someone really understands your MEANING and INTENTION, not just your words?

What about simply asking them to tell you what they’re now going to do, and how they’re going to do it, in their own words.

Sure, you’ve got to assume that your employees have common sense, but, as a quick tip, if you want to lower your frustration levels and have important things done right the first time, think about your communication, and equally, encourage your employees to seek clarification of your instructions.

This is particularly important in workplaces where English isn’t the first language of many of our employees, many of our words have multiple meanings, and phases common to us can be misinterpreted by others.  I remember being amused when I heard that the phrase ‘Out of sight, out of mind’ had been misinterpreted as ‘Blind idiot’ in a Japanese translation.

So, think about the effectiveness of your communication…before getting too frustrated or playing the blame game.

PrevPreviousAre you sacrificing the IMPORTANT for the sake of the URGENT?
NextDoes your recruitment process include this essential component?Next
Business insights