Here’s why increasing efficiency in your business can waste time & money. 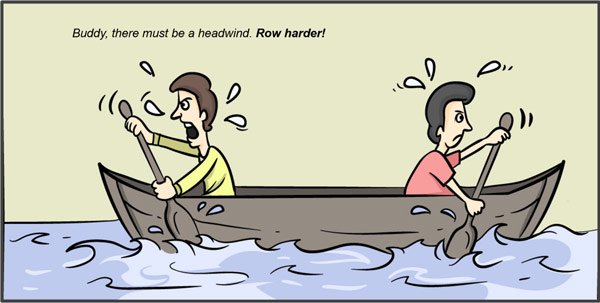 It may seem counter-intuitive to suggest that increasing the efficiency in your business can be a waste of time and money, yet it’s true.

Before I explain why, let me ask you: Have you ever wondered why the QWERTY keyboard used with modern computers has one of the most ergonomically inefficient layouts possible?

You may be surprised that the layout was originally developed for a mechanical typewriter over 150 years ago. The keys on these old fashioned typewriters were very heavy to press, and it’s worth knowing that until recent times, typing was considered ‘women’s work’ and typists were taught strictly to use all of their fingers, not just two-fingers!

So, why then was the letter ‘A’, one of the most common letters in the English language, positioned so that it needed to be pressed by the pinky-finger of the left hand…the weakest finger on the least dominant hand, of typists who were not hired for their strength?

The answer is: it was purposefully designed to slow the typist down! Designed to be ERGONOMICALLY INEFFICIENT!

No, the designers weren’t stupid…there was method in their madness.  The prototype keyboard layouts (prior to the QWERTY layout) were much more ergonomically efficient, but as typing speeds increased it was common for two strikers to collide with each other and jam, or not hit the desired strike location properly, causing misprints on the document. This caused delays and rework.  So, redesigning the layout of the keyboard to slow the typist down meant that jams and mis-strikes would be avoided. Consequently the document could be completed in less time with fewer mistakes.  Thus the ‘overall process efficiency’ increased, even while the efficiency of sub-parts of the process decreased.  This brings me to the concept of Overall Process Effectiveness (OPE) or, more commonly Overall Equipment Effectiveness (OEE) in many manufacturing situations.

Broadly speaking, OEE is a percentage measure related to the Speed (or ‘Performance’) of the Equipment, the Quality produced, and the time the machine is Availability for use, each expressed in percentage terms. (I won’t go into the detail here, but it’s important to note that you have to be careful WHERE in your process you measure OEE, otherwise your result can be very misleading, and you may be wasting your time.)

Side Note:  Obviously, we no longer have the issues that led to the inefficient design of the QWERTY keyboard, though we’re still living with this inefficient design, barely even questioning it! How inefficient is that, and what other inefficient or poor business practices have we INHERITED? (There are SEVERAL and you’ll get an idea about some of them by reading various articles that we publish, including some related to Accounting.)

Yeah, I know…you don’t have a typewriter in your business. So, what’s the point?

The point is that you need to look at the efficiency (and effectiveness) of the process as a whole, not simply the individual parts.

If you’re spending time and money increasing the efficiency of a non-bottleneck part of an overall process, you’re increasing the capacity at that location, but unless that somehow translates into more product or service out the door and to the customer, then you’ve basically gained nothing! In fact, the time and money you spent increasing the efficiency at that non-bottleneck would have been better spent trying to reduce your bottleneck. (Yes…bottlenecks can and do move, and you should always be chasing them down and reducing them!)

Let me give you a more tangible example related to modern business processes.

I was engaged by a company to help them improve the efficiency of their injection moulding department. I asked them a series of questions, shown below, together with their answers:

My answer to that was to start with the injection moulding area since there was already team buy-in to do so, and it would be a valuable learning exercise for them, even if it wasn’t a bottleneck, AND at the same time, we’d go through a value-stream mapping (VSM) exercise to find out where the key bottleneck(s) were and address them.  If we were lucky, the injection moulding area would be a key bottleneck and they would see immediate benefits in getting product out the door to the customer faster.

I did some work with a medium sized company that received vegetables from farmers, then ‘processed’ and packaged them for supermarkets around the country. Here’s the basic process they followed:

Their pressing problem at the time was that the vegetables must leave the chiller at a particular temperature, and during the hot summer weather their chiller couldn’t cope with the quantity of vegetables they wanted to put through it. Their ‘solution’ was to slow the whole line down so that the vegetables would exit the chiller at the desired temperature. The longer term solution they had in mind was to increase the capacity of the chiller, a time consuming and expensive capital investment exercise, which was gross over-capitalisation for the bulk of their year’s production requirements.

By reviewing their process I observed that a relatively high percentage of the product (around 20% or more) was being rejected during the hand-sorting phase, and separated out for local animal consumption, and DIDN’T need to go into the packaging room or cool-store. It didn’t need to be chilled at all!

A better solution would be:

This would immediately increase the output by 25% (i.e. 25% of 8 tonnes = 2 tonnes extra), and avoid significant investment and delays in up-sizing the chiller.

More about the Point!

Sometimes bottlenecks can be external to your business…for example, there may be little or no market demand for your product or service, so you may have very little or no sales.  If you manufacture wagon-wheels (the horse and cart variety not the ones found in the chocolate isle) and ask me if I can help increase the efficiency of your manufacturing processes, I’d say, “Sure…but if that’s not going to help you sell more, you’ll be wasting your time and money!”  You get the point!

The flip side of this is if you’re very efficient at selling and have an internal bottleneck instead.  If you keep selling more than you can deliver, all you end up with is dissatisfied customers, a poor reputation, and lots of pressure and stress from all directions. Increasing your sales efficiency in this situation is counter-productive to your business goals, and probably counter-productive to your life goals as well.

Find your bottleneck and focus on it!  That’s where you’ll see a return on your effort to increase efficiency. Our Diagnostic Assessment & Report is as simple way to evaluate how your business stacks up and where your bottlenecks might be hiding.

PrevPreviousRead this before making capital investments in your business!
NextIf you’re a CEO, employee negligence could land YOU in jail!Next
Business insights