Are your KPI’s driving the wrong behaviour and results? 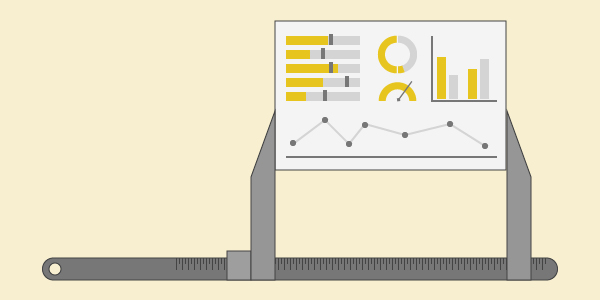 Key Performance Indicators (KPI’s) are an important part of growing a healthy and successful business, and relate to the old adage:

You can’t manage what you can’t measure.

That doesn’t mean all KPI’s are appropriate or useful! That’s because there’s another equally important adage, attributable to Einstein:

There are two main traps people fall into:-

What do I mean by measuring the wrong things?

An example I came across when working for a large automotive manufacturer was measuring the ‘number of warranty problems fixed each year due to design or manufacturing issues’.  I remember having a discussion with an Executive Director who wanted to INCREASE the yearly target of problems we fixed each year, thinking that that would improve quality and customer satisfaction.  My argument was that this was an inappropriate KPI because we should be aiming to create FEWER problems to fix in the first place…a completely different way of thinking…addressing the root cause, not the symptoms.

The problem with the metric, as it stood, was due to yet another adage:

What gets measured gets done.

It’s human nature for someone to try to achieve a KPI target that they’re being measured against and rewarded for (or punished for missing). When an inappropriate KPI is inserted into an individual’s Performance Plan by a superior (whether they agree with that KPI of not) there’s pressure for them to achieve it. Terrible as it may sound, the KPI I mentioned further above led to a practice of some people NOT fixing problems completely the first time round, just so that they’d get a tick in the box for ‘fixing’ it the first time, and a second tick in the box for fixing the remaining bit at a later date.

The other aspect to measuring the Wrong Thing is whether we’re measuring lead or lag indicators.

A lead indicator is something you can measure that gives you a prediction of future performance. For example, the number of people who smoke cigarettes may give you an indication of future lung-cancer rates. With such predictors corrective-action plans can be put in place.

A lag indicator is after the fact! An example may be a company’s tax return where the accountant reports on what already happened, with no ability to influence the result.

Another aspect of measuring the wrong things is creating conflicting metrics. By way of example, in a game of soccer, a team wins when they score more goals than their opponents. When the team knows that their sole objective is to win the game, they work as a team.

But, suppose that the each team member were rewarded based on the number of goals they personally kicked (regardless of whether their team won or lost). What would happen then?  Do you think that some players would attempt shots at goal they had only a very slim chance of achieving, rather than passing the ball to a team mate who was in a much better position to score? Of course they would! It’s obvious! Also, it would be very unfair for people in the backline who never have a chance of kicking a goal, and would no doubt set up some internal jealousy and conflict within the team.

We can see in the above example how conflicting metrics lessen the team’s chance of working co-operatively and winning the game. But when it comes to business, metrics, targets and rewards are often set to reward individual performance at the expense of business performance!

As examples we see:

The list goes on and on!  We need to determine whether or not what we’re measuring and setting as KPI’s is helping us improve our results. If not, it’s a waste!

So, fundamentally, why don’t those who are setting the KPI’s and targets see what’s happening and address it?  The answers are many, but it’s usually a combination of:

Measuring Too Many Things

If you would like an outsider’s view of whether your KPI’s are hurting or helping your business, you can reach out to us here.

PrevPreviousTrained your team but not getting expected results? Here’s why.
NextDo ERP’s and CRM’s help a business or do they just pretend to?Next
Business insights